The Seder's over, let's laugh! We can't have bread but we can enjoy jokes.

To keep the excitement around Danielle Brody's Haggadah, "Don't Fuhaggadahboudit," going, she produced a Jewish comedy show with four amazing NYC comedians and writers. Let's laugh about all things Jewish and Passover, and maybe even 4/20 too.

FreddyG is standup up comic from NYC. His joke videos have over 3 million views on Instagram and 15 Million on Tiktok.  He has also performed on Sirius XM and NPR. Check him out on Tiktok, Instagram, and Twitter @Orangefreddyg.

Eitan Levine is a New York based writer and comedian/human theme park. He has written for New York Times and New York Magazine. Follow him @eitanthegoalie.

Jess Salomon is a New York based Canadian comedian, who has appeared on The Tonight Show with Jimmy Fallon. Jess handles dark, sometimes dirty and often political topics with a light touch. Follow her on Instagram @jess_salomon

Produced, hosted, and doodled by Danielle Brody
Danielle is an author, cartoonist, and marketer. She has performed standup at QED and Union Hall. In 2020, she started drawing cartoons about her life and Judaism. Now, she is the founder and creative director of Danielle in Doodles. She published "Don't Fuhaggadahboudit," a hilarious Haggadah based in NYC. Follow her on Instagram @danielleindoodles and @jewsindoodles. 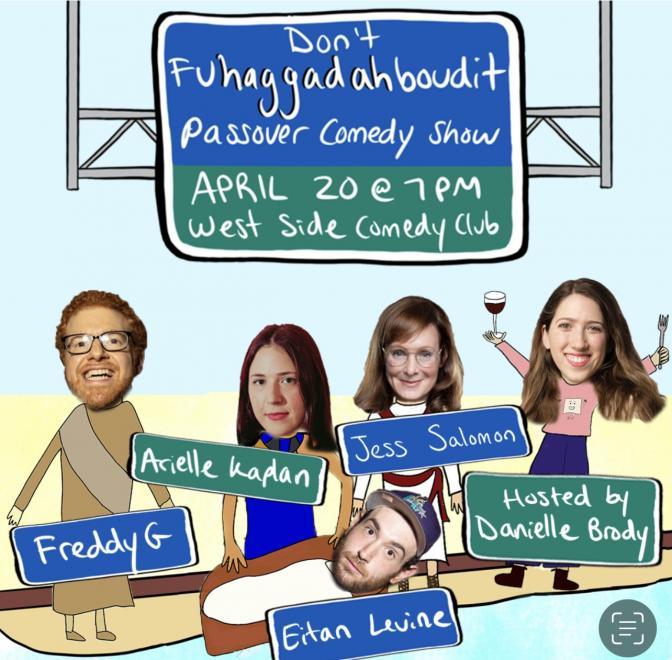