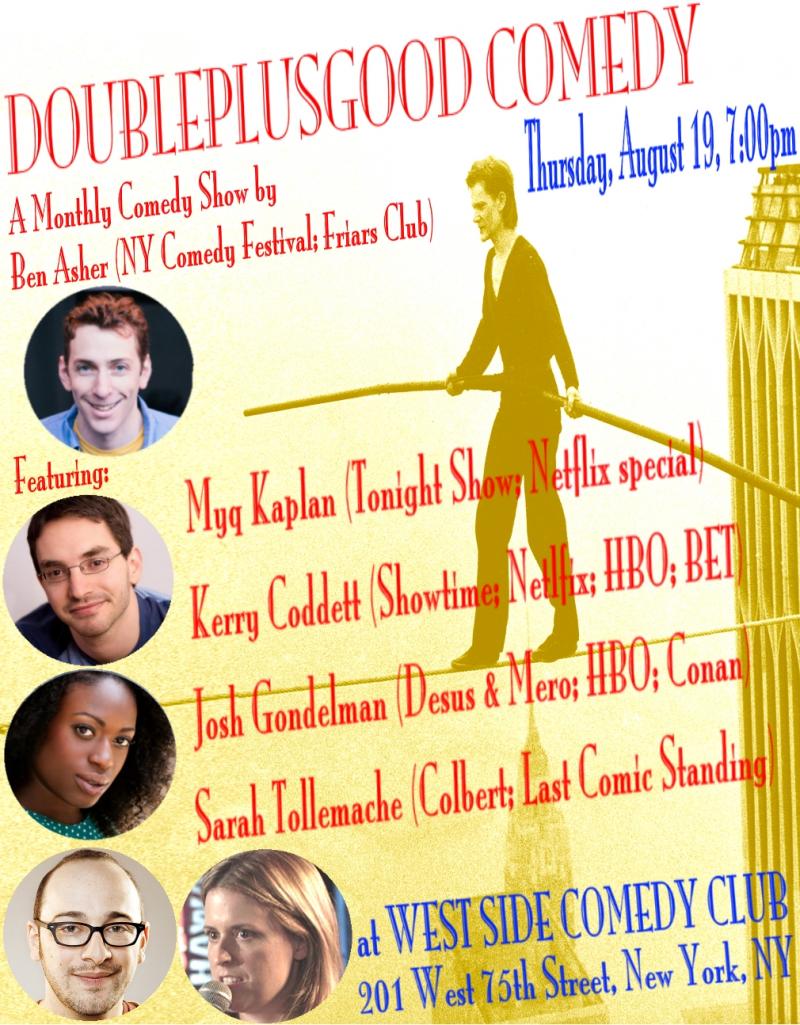 Ben Asher's DoublePlusGood Comedy show brings you comedy that reaches up into your brain with the force of a fist through the nose. Top comics from TV and NYC's major clubs performing long sets on an intimate stage. Past performers include comedians from HBO, Netlfix, Colbert, SNL, the Daily Show, Letterman, the Tonight Show, Comedy Central, and more.

Every month you can hear some of the most talented comics perform long sets, that other shows don't give them the time to perform. DoublePlusGood Comedy is your chance to get to really watch comedians flex their muscles and hit their stride on stage, at the West Side Comedy Club, where you can eat and drink the most delicious food in the city from Playa Betty's.

Myq Kaplan (Myq has appeared on the Tonight Show, Conan, Letterman, James Corden, Seth Meyers, Comedy Central, Last Comic Standing, and America’s Got Talent. He has a one-hour standup special on Amazon, “Small, Dork, and Handsome,” and two podcasts, The Faucet and Broccoli and Ice Cream. His first album, “Vegan Mind Meld,” was one of iTunes’ top 10 comedy albums of the year, and his newest album, “A.K.A.,” debuted at #1.) - https://twitter.com/myqkaplan

Kerry Coddett (Staff writer on Showtime’s new show Flatbush Misdemeanors, which she will also appear on as a recurring character. Touted as “inimitable” by The Huffington Post and as “a rising star”
by The Interrobang, Kerry appears on season 2 of Ramy on Hulu and is a core cast member of the new The Iliza Shlesinger Sketch Show on Netflix. She was a staff writer on Wyatt Cenac’s Problem Areas, which was produced by John Oliver and aired on HBO. Kerry can also be seen on E!’s Funny Dance Show, HBO’s Crashing, TruTV’s Laff Mobb’s Laff Tracks, and BET's The Rundown with Robin Thede. She was a regular on Comedy Central's The Nightly Show with Larry Wilmore, a recurring cast member on MTV’s Joking Off, and she’s also appeared on TruTV’s Comedy Knockout. ) - https://twitter.com/Overfab

Josh Gondelman (writer and producer for Desus & Mero on Showtime; spent five years at Last Week Tonight with John Oliver, first as a web producer and then as a staff writer; In 2016, Josh made his late night
standup debut on Conan (TBS), and he has also performed on Late Night With Seth Meyers (NBC) and The Late Late Show with James Corden (CBS). Gondelman is also the author of the essay collection Nice Try: Stories of Best Intentions and Mixed Results published September 2019 by Harper Perennial. And as of 2019, he has become a regular panelist onNPR mainstay Wait Wait Don’t Tell Me.) -
https://twitter.com/joshgondelman

Sarah Tollemache (featured on Comedy Central as well as NBC’s ‘Last Comic Standing’. In 2017 she appeared on ‘The Late Show with Stephen Colbert’. Tollemache followed that up with another late-night
appearance, this time on ‘The Late Late Show with James Corden’. She has also appeared on Comedy Central’s ‘Roast Battle’ and Gotham Comedy Live. When she’s not touring comedy clubs around the country Sarah can be seen regularly at The Comedy Cellar and New York Comedy Club in New York City. Sarah is also the Co-Host of the popular weekly podcast ‘Vadge’.) - https://twitter.com/stollemache

From TimeOut NY: For comedy connoisseurs tired of seeing their favorite comics squeeze their sets into five minutes, Ben Asher's monthly showcase provides full-length sets and a chill atmosphere for
diverse acts to thrive in.

Press: In adddition to being a TimeOut New York 'Critics Pick',TimeOut NY has frequently called DoublePlusGood Comedy show the "best cheap things to do," of the week and one of the “most amazing things
to do” of the month, and the New York Times has listed DoublePlusGoodComedy show as an editor's choice multiple times.